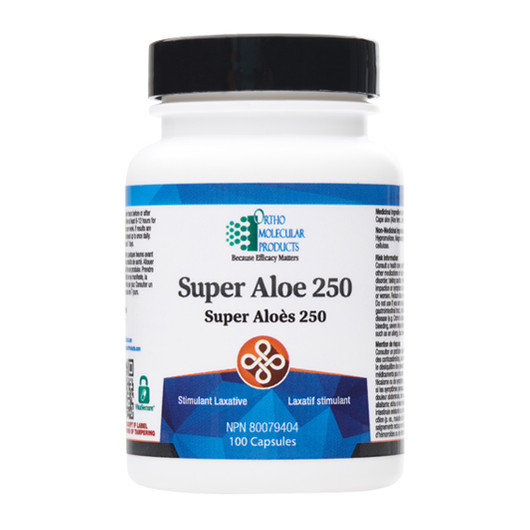 You save
Frequently bought together:

Super Aloe is used for short-term relief of occasional constipation. Natural support for elimination and to promote bowel movement.

Cape Aloe; has been used to promote healthy elimination. Cape aloe is one of a class of compounds called anthraquinone glycosides. Per the European Medicines Agency (EMA), cape aloe possesses two different mechanisms of action as a laxative:

1) stimulation of the motility of the large intestine, resulting in accelerated colonic transit;

When ingested, cape aloe molecules are activated through bacterial metabolism in the gut. They promote water retention in the stool and stimulate peristalsis in the large intestine. By stimulating active chloride secretion, aloe increases the water and electrolyte content in the stool and eases its passage without the artificial additives.

Suggested Dose: Adults: Take 1 capsule per day at bedtime a few hours before or after taking other medications or health products. Allow at least 6-12 hours for laxative effect to occur. Take two to three times per week. If results are not observed, the frequency of use may be increased up to once daily. Consult a health care practitioner for use beyond 7 days.

Ortho Molecular Products Fiber Plus Powder 30 Servings: Fiber Plus is a natural fiber supplement with a balanced ratio of soluble and insoluble fiber to help with occasional constipation and...
SKU:
21185V

Ortho Molecular Products Thyrotain 120 Capsules: Thyrotain helps to support thyroid health. Thyrotain includes iodine, which makes up the backbone of the (T4) and (T3). Helps in the function of the...
SKU:
21203V

Ortho Molecular Products Vitamin K2 with D3 Liquid 30 ml: Helps in the development and maintenance of bones and teeth. Helps in the absorption and use of calcium and phosphorus. Helps to maintain...
SKU:
21205V

Ortho Molecular Products Fiber Plus Powder 30 Servings: Fiber Plus is a natural fiber supplement with a balanced ratio of soluble and insoluble fiber to help with occasional constipation and...
SKU:
21185V