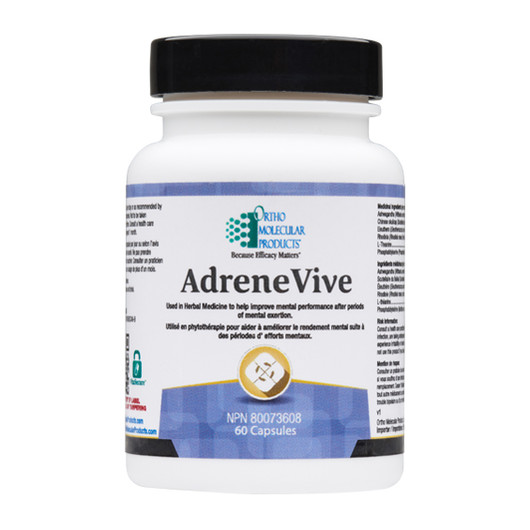 You save
Frequently bought together:

AdreneVive contains a blend of botanicals and ingredients specifically formulated to relieve weakness, and after exertion, improve mental and/or physical performance.

L-Theanine; L-theanine is an amino acid found abundantly in green tea and is associated with antioxidant effects including lowering the activity of hydrogen peroxide and hypochlorous acid invitro. 5 L-theanine has also demonstrated a protective role against oxidative stress in brains of rodents with a decrease in nitric oxide and an increase in the status of antioxidants.

Ashwagandha Root Extract;Ashwagandha (Withania somnifera) has been shown to decrease levels of oxidants, inhibiting lipid peroxidation and reducing oxidative stress, as well as increasing the levels of antioxidant enzymes in the seminal plasma.

Eleuthero Root Extract; Eleutherococcus senticosus is used in Western herbal medicine for indications such as temporary fatigue and general debility. In addition, it has been recognized to help with performance after exertion according to Western Medicine.

Skullcap Root Extract; Scutellaria baicalensis has flavanoids which provide numerous protective effects including antioxidant activity. The antioxidative activities of the flavones in Skullcap root (including Baicalin) has been shown to scavenge free radicals and depress the effects of lipid oxidation.

Suggested Dose: Adults: Take 1 capsule per day or as recommended by your health care professional. Not to be taken immediately before bedtime. Consult a health care practitioner for use beyond 1 month.

Was: CAD $61.18
Sale Price: Your Price: CAD $52.00
CAD $61.18
Biotics Research Immuno gG 100 Capsules:Description: To increase Gamma Globulin. Colostrum is the most prolific substance for boosting sIgA levels in the gut. This provides a balancing effect on...
SKU:
13095