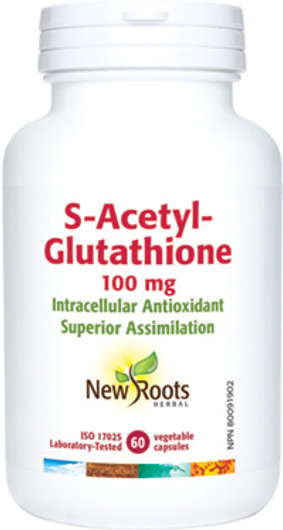 Research has demonstrated the antioxidant action of S‑acetyl‑glutathione rivals that of vitamins C and E. It’s also involved in liver support due to systemic antioxidant activity which can benefit cells throughout the body for better health.

As we experience an age-related depletion of this precious compound, our cells become more vulnerable. Thankfully, reinforcement through supplementation is simple and effective.

Suggested Dose: Adults take 1–2 capsules daily or as directed by your health-care practitioner.

Cautions: Consult a health-care practitioner prior to use if you are pregnant or breast-feeding. Do not use if seal is broken. Keep out of reach of children.

Was: CAD $24.34
Sale Price: Your Price: CAD $20.69
CAD $24.34
New Roots Rose Geranium Essential Oil Organic 15 ml: The greatest perfumers in the world have formulated fragrances based on geranium. However, only a few drops of pure geranium essential oil...
SKU:
21066