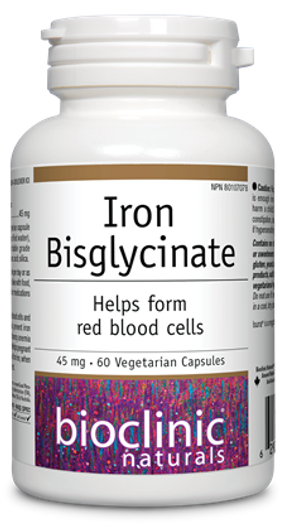 Provides a clinical dose of elemental iron per capsule; Highly absorbable form, iron bisglycinate chelate, has greater bioavailability than standard forms; Comparable to ferrous sulphate at ¼ to « the same dose of elemental iron; Iron bisglycinate chelate is significantly more tolerable than commonly used forms, allowing for continued use and enhancing its effectiveness in replenishing iron stores; Suitable for vegetarians and vegans.

Iron deficiency remains the most prevalent nutrient deficiency as well as the most common cause of anemia worldwide. Depleted iron stores impair mitochondrial function and cellular respiration even in the absence of anemia, particularly in metabolically active cells, contributing to symptoms ranging from fatigue and exercise intolerance to cognitive and cardiac impairment. The mainstay for replenishing iron levels in the majority of cases is oral iron supplementation, which is preferable to parenteral administration (injections) in the absence of severe symptoms or contraindications.

However, many oral iron formulations have limited tolerability, primarily due to frequent gastrointestinal symptoms. In contrast, iron bisglycinate chelate, which is composed of two glycine molecules chelated to ferrous iron (Fe2+), has demonstrated significantly greater bioavailability than standard forms of iron such as ferrous sulphate, ferrous fumarate, and polymaltose iron. This form has much greater tolerability, allowing for effective restoration of iron levels using lower doses. For example, at ¼ to « the dose of ferrous sulphate, iron bisglycinate chelate has shown similar effects on hemoglobin, ferritin, and other markers of hematological status in controlled trials, with better tolerability. It has also been found to be effective and well tolerated in a variety of patient populations, including pregnant women and children with celiac disease. 45 mg of elemental iron per capsule, higher than most formulations, is consistent with current recommendations for restoring depleted iron levels in pregnant women, though lower than the threshold typically associated with adverse effects.

Recommended Adult Dose : 1 capsule per day or as directed by a health care practitioner. Take with food, a few hours before or after taking other medications or natural health products..

Cautions : Oral iron supplementation should not be used by individuals with hereditary hemochromatosis, hemosiderosis, or a history of hemolytic anemia without supervision. All cases of anemia should be thoroughly evaluated, and progress monitored. Some medical agents interfere with the absorption of iron or have their own absorption reduced by iron, and should be taken several hours apart.

Was: CAD $27.38
Sale Price: Your Price: CAD $21.90
CAD $27.38
Designs for Health Ferrochel Iron Chelate 120 Veg: Ferrochel® Iron Chelate is a potent iron supplement that is extremely well tolerated by the gastrointestinal system. Unlike most iron...
SKU:
15122

Was:
Sale Price: Your Price: CAD $33.90
NFH HCl‑Pepsin SAP 120 Capsules: Betaine (trimethylglycine) is a key human nutrient present in most tissues and is endogenously synthesized from choline in the liver and kidney. Betaine plays...
SKU:
22822

Was: CAD $91.00
Sale Price: Your Price: CAD $72.80
CAD $91.00
Bioclinic Naturals Theracurmin 2X 75 Veg Capsules: The well-known benefits of curcumin, a polyphenolic extract of turmeric, have been attributed to powerful anti-inflammatory and antioxidant...
SKU:
14895