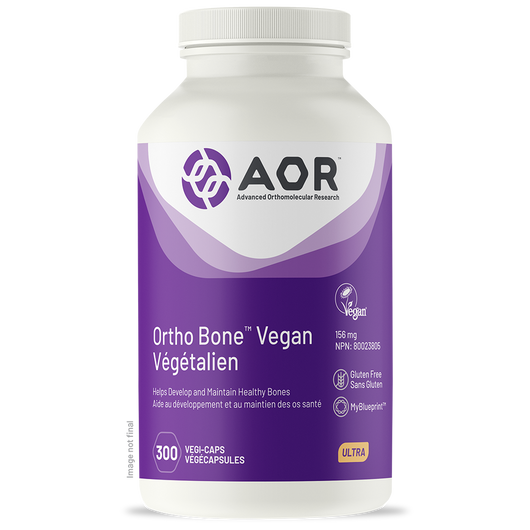 The Most Powerful Vegan Bone Formula.

Ortho Bone Vegan is a multi-vitamin and mineral supplement which contains ingredients that help in the development and maintenance of healthy bones. Calcium intake, when combined with sufficient vitamin D, a healthy diet, and regular exercise, may reduce the risk of developing osteoporosis. Ortho•Bone Vegan also provides adequate folate which, along with other ingredients, helps to form red blood cells.

Ortho Bone Vegan is an advanced bone health formula which provides nutrients that are fundamental for keeping bones strong, especially for those with osteoporosis, osteopenia or a history of bone fractures. Ortho•Bone Vegan differs from AOR’s original Ortho•Bone in that it is suitable for vegans, providing the most effective non-animal-based sources of calcium, vitamin D, and other bone-building nutrients. Find Aor Supplements at healthpalace.ca

While calcium is important, it is only part of the picture, and many other nutrients are needed to maintain strong, healthy bones. Ortho•Bone Vegan also provides vitamins D and K for proper absorption and usage of calcium, vitamin C and silicon to support collagen production, magnesium which makes up a large part of the bone mineral matrix, boron to reduce magnesium loss, and trace minerals manganese, zinc and copper which are co-factors for enzymes involved in bone growth and repair. Lastly, vitamins B12 and folate are included to help reduce homocysteine, a metabolic by-product that is toxic to bone fibers.

Ortho Bone Vegan is an ideal formula for vegetarians, vegans, post-menopausal women, and those with osteopenia or a family history of osteoporosis.

AOR guarantees that all ingredients have been declared on the label. Contains no wheat, gluten, peanuts, sesame seeds, sulphites, mustard, dairy, eggs or any animal byproduct.

(Adult): Take up to 10 capsules daily with meals, or as directed by a qualified health care practitioner. Take a few hours before or after taking other medications.

Consult a health care practitioner prior to use if you are taking blood thinners. Some people may experience diarrhea. Contains soy.

News Flash: The amount of calcium consumed is not the same as the amount of calcium absorbed. Calcium citrate-malate is a more bioavailable calcium than simple calcium citrate, and its documented support for bone health is superior to that of any other vegetarian calcium source. In fact, one study demonstrated the absorption efficiency from a 250 milligram dose of calcium citrate malate to be 35%; from calcium carbonate, 27%; and from tricalcium phosphate, 25%. In comparison, the rate of calcium absorption from milk was found to be 29%. The scientific reasoning for the aforementioned calcium recommendations for high risk groups used traditional (dietary) calcium sources for calculating the required amounts. Find Aor Supplements at healthpalace.ca

Calcium citrate-malate has been used successfully in many controlled trials to support bone mass and/or to lower fracture risk. Some of these trials have involved a direct face-off between calcium citrate-malate and other forms of calcium. Such trials demonstrate that, as might be expected from its greater bioavailability, calcium citrate-malate gives better protection to the bones than other vegetarian calcium sources – although its effects are still not as impressive as those of MCHC.

A review published in 2012 cited that the most prevalent factors associated with both osteoporosis and atherosclerosis were low calcium intake, deficiencies in vitamins D & K, and high sodium intake. Clinical trials show that calcium supplementation provides better results when combined with vitamin D at doses greater than 300 IU per day.

A double-blind, controlled clinical trial on post-menopausal women examined the effects of a plain dairy product versus a dairy product enriched with 800 mg of calcium, 10 mcg of vitamin D and 100 mcg of either vitamin K1 or K2. While total bone mass density increased for all the dairy groups, lumbar spine bone mineral density increased significantly only in the two groups receiving the treatments enriched with calcium and vitamins D & K.

Another nutrient essential to bone health is vitamin D. Vitamin D is the single most important factor in the absorption of calcium. Vitamin D2 (Ergocalciferol) is the plant form of vitamin D found in vegetables and yeast. Although humans are fully capable of endogenous vitamin D production, this is dependent upon adequate exposure to the UVB rays in sunlight, making a constant, steady intake of this vitamin difficult for high-risk demographics who are often confined indoors.

From what we now know, the old RDA of 400 IU will not protect you from vitamin D insufficiency except in the sunniest of climates. Even in sunny Spain, researchers have found that 80% of children have inadequate vitamin D levels in March and October. In fact, in one remarkable recent study, researchers at Creighton University were able to document that even North Americans who spend nearly all day in the sun during the summer (such as landscapers and agricultural workers) were still at a 58% risk of being too low in vitamin D to support optimal calcium metabolism by the end of the winter! Studies show that a 400 IU vitamin D supplement is just not enough to keep serum levels of the active vitamin above the cutoff for insufficiency, and the use of 400 IU supplements have not been shown to reduce fracture rates. Even 600 IU has little effect on BMD. Instead, controlled studies show that vitamin D, together with calcium, helps to reduce the risk of fracture at a dose of at least 800 IU per day and recent trials suggest much higher dosages are needed to maintain optimal blood levels. Find Aor Supplements at healthpalace.ca

Recent studies have suggested that vitamin K2 is better absorbed and persists longer in the plasma then vitamin K1. Studies have also shown that it also has greater benefits to the skeletal and vascular systems than vitamin K1. Vitamin K is important for bone health as it is able to regulate calcium through the amino acid gamma-carboxyglutamic acid (Gla), and in particular the protein osteocalcin, which helps maintain calcium in bone, but at the same time keeps it out of soft tissue.

The advantages of taking both MK-4 and MK-7

More recently, Vitamin K2 in the forms of MK-4 and MK-7 has emerged as bone-building superstars.  MK-4 is a specific form of vitamin K2 produced in the body from phylloquinone (vitamin K1) or even the bacterial menaquinones (which are also forms of vitamin K2). It is thought that other forms of vitamin K are converted to MK-4 in order to be absorbed by cells. Multiple clinical trials show that megadose MK-4 supplements reduce fracture rates in osteoporotic women as much as Fosamax®-type drugs by improving the quality of the bone itself, measured by bone mineral content and width. Another study found that MK-4 combined with 1500 mg of calcium carbonate significantly increased bone density in the lumbar spine and decreased the amount of undercarboxylated osteocalcin compared to just the 1500 mg of calcium alone.

In a recent study comparing MK-4 against MK-7, one of the first actually comparing the two head-to-head, it was found that when subjects took a single dose administration of 420 μg of MK-4 or MK-7, the MK-7 was well absorbed and reached maximal serum level at 6 h after intake and was detected up to 48 h after intake. MK-4 was not detectable in the serum of all subjects at any time point. It is not yet clear whether this is because MK-4 was metabolized very quickly (some nutrients actually benefit from a short half-life) or because it was not absorbed. Consecutive administration of MK-7 at 60 μg for 7 days demonstrated that MK-7 increased serum MK-7 levels significantly in all subjects and activated osteocalcin at this dose. Further research is warranted on the benefits of both forms of vitamin K2, as MK-4 has shown many beneficial effects in humans that have not yet been studied with MK-7 (for example, liver cancer), and there appears to be a cellular receptor specific to MK-4 in humans. Therefore, AOR has chosen to provide both MK-4 and MK-7 in Ortho•Bone to maximize the potential benefits of each.

Take a magnesium you can absorb. Magnesium citrate is absorbed at 29.64%, but much better absorption is available from other forms – especially fully-reacted magnesium aspartate, with a remarkable 41.7% bioavailability. Find Aor Supplements at healthpalace.ca

In a two-year, open, controlled trial, 71% of women receiving magnesium supplements experienced increased bone mineral density where as the women not receiving supplements suffered bone loss. The amount of magnesium in even the highest quality multi-vitamin/multi-mineral supplements is still well below levels which researchers believe are needed for prevention in high risk demographics.

Was: CAD $39.94
Sale Price: Your Price: CAD $31.95
CAD $39.94
Aor Strontium Support II. Strontium is a trace mineral which concentrates in the skeletal system, where it supports the function of osteoblasts (the cells which form new bone) while reducing...
SKU:
1163