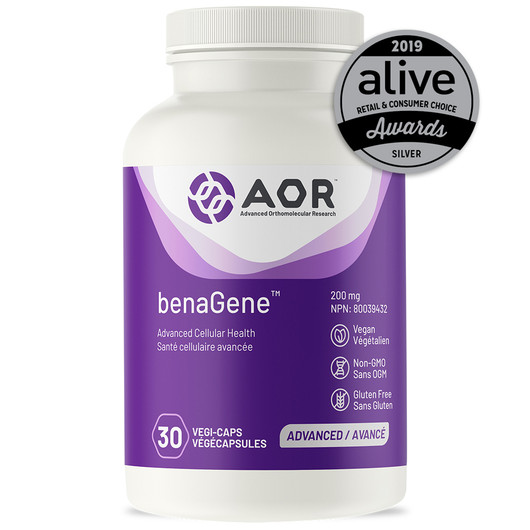 Contains antioxidants for the maintenance of good health. Key to a Long Healthy Life. Stimulates over 350 anti-aging genes. Shown to increase health and lifespan in animals. May help reduce blood glucose levels.

BenaGene™ is stabilized oxaloacetic acid, the world's first novel and natural Krebs cycle intermediate compound that is specifically formulated to be highly stable and bioavailable so that a one-a-day dosage is all that is required.  BenaGene offers the potential of longevity and vitality and is exclusively available in Canada from AOR.

Caloric restriction is the only method proven to extend human lifespan and health span. BenaGene is a novel caloric restriction mimetic (CR mimetic), mimicking up to 98% of the changes in the genetic expression of over 350 genes in a similar fashion to caloric restriction. While human trials on BenaGene™’s effects on life extension have not been conducted for obvious reasons, human clinical trials have confirmed both reduction in glucose levels and an improved uptake of glucose without negative side effects. BenaGene™ appears to down-regulate pathways that create and store fat. Mitochondrial and cellular DNA damage is also thought to exacerbate aging, and BenaGene™ both protects and repairs DNA.

Anyone who is interested in ways to slow down the aging process will want to consider taking BeneGene™. It may also help to balance blood sugar levels in people with glucose imbalances. BenaGene™ is a perfect partner for resveratrol and other antioxidant supplementation.

What is benaGene™?
benaGene is thermally stabilized oxaloacetate, the world’s first novel and natural Krebs cycle intermediate compound that is specifically formulated to be highly stable and bioavailable so that a one-a-day dosage is all that is required, making its exciting health benefits easy to swallow.

The Key: A High NAD /NADH Ratio:
NAD (nicotinamide adenine dinucleotide) is a niacin-derived coenzyme that is present in all living cells and is critical to the production of ATP – the body’s primary source of all immediate energy. Higher NAD levels are thought to have a stimulatory effect on beneficial genes whilst a high NADH concentration is thought to inhibit beneficial genes. benaGeneTM appears to promote a high NAD /NADH ratio.

benaGene increases the conversion of NADH to NAD and also influences changes in the electrical state (Gibbs free energy) and critical signalling molecules. Oxaloacetate has also been found to prevent brain mitochondrial DNA damage in mice.

Purity: Non GMO, Vegan, that no ingredients not listed on the label have been added to the product. Contains no wheat, gluten, nuts, peanuts, sesame seeds, sulphites, mustard, soy, dairy, eggs, fish, shellfish or any animal byproduct.

Suggested Dose: Take 1 capsule daily with food or as directed by a qualified health care practitioner.

Was: CAD $50.56
Sale Price: Your Price: CAD $40.45
CAD $50.56
AOR Astaxanthin 4mg 60 Capsules: (Formerly Astaxanthin Ultra). A unique antioxidant. Astaxanthin is a carotenoid sourced from algae which does not turn into a free radical itself like most...
SKU:
1027