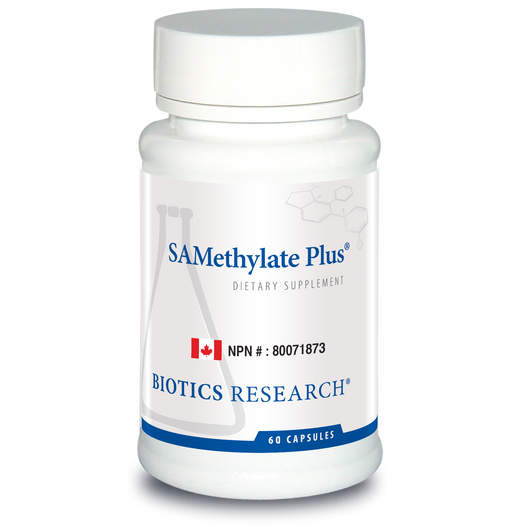 biotics suggests that can be Considered for: histamine responses. SAMe (S-adenosyl-L-methionine) is found in every living cell in the body where it functions as a component of cellular methylation reactions, and is the principal methyl group donor in a variety of reactions. In the body, it is formed from the reaction of the amino acid methionine and adenosine triphosphate (ADP).(1,2) SAMe is able to cross the blood-brain barrier where it impacts the synthesis and activation of various brain chemicals, including neurotransmitters.(3) It also plays a critical role in cartilage formation, and is therefore important for joint health. Methylation is a vital biochemical process for many biological processes, including the metabolism of lipids and the manufacturing of DNA. As we age, our body’s ability to methylate declines, contributing to the aging process. It is believed that adequate methylation of DNA can prevent the expression of harmful genes. SAMethylate Plus™ supplies a stable source of SAMe with important synergists and building blocks, including B6, Folate, B12, L-Methionine, Choline bitartrate, trimethylglycine, SOD and Catalase.

Cautions: Pregnant or lactating women should consult with their physician prior to use. Avoid in patients taking monoamine oxidase inhibitors and herbs or supplements with serotonergic properties, or those with Parkinson’s disease. KEEP OUT OF REACH OF CHILDREN

Biotics Research Osteo B Plus With D K Boron 90 Tablets